STRIKE! The Game of Worker Rebellion 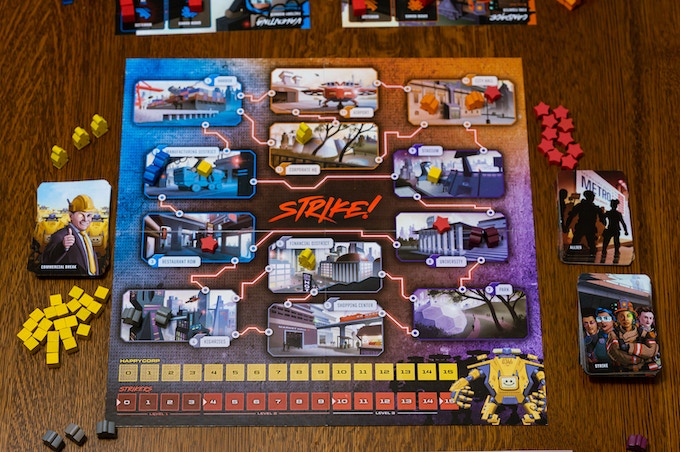 HappyCorp, like any nefarious corporation, can win in multiple ways: by scoring 15 victory points of its own, or by deploying all six of its MegaDrones across the city.

Geekdad (read the full review here):
"Overall, I think Strike! works well both as a cooperative game with a hint of a sci-fi theme, and as a conversation starter about the labor movement. It feels like there are plenty of games in which players are the corporations, maximizing profits and exploiting resources and labor, but not many that take the worker’s perspective into account. Strike! is a rare exception to that rule, and is worth checking out, especially if you like the theme."
Uproxx (read the full review here):

"Cooperative games can always slip into familiar problems of an “alpha” gamer making decisions for everyone, but Strike seems designed to unlearn that and genuinely have players work together. There are a lot of ways to win using a variety of abilities to move around the board, but no one can truly finish the job alone. It’s a game that advocates for action to its core, and that includes encouraging more reluctant players to take part in the strategy and use their unique skills each turn."

A Pawn's Perspective, which gave STRIKE! 4.3 out of 5 stars (read the full review here):
"Fast-playing and easy to learn. Replayable with different character options."
Cardboard Republic:

"Games about the labor rights movement of the last century are not particularly voluminous, and even fewer tackle the topic from a modern perspective. In an era of unprecedented wealth and social inequality the likes of which we haven’t seen in a century, STRIKE! aims to step into that void with an approachable game that’s one part social awareness, one part classic co-op, and one part dystopian warning."

"As soon as STRIKE! The Game of Worker Rebellion was done, I was ready to play again. The theme and mechanics blended together smoothly and with intention. My favorite part of the game is how empowered I felt helping the labor movement take down HappyCorp. To be fair, that theme aligns with my core values, but I think the game does a great job helping you personify yourself as the underdog going up against behemoth, which anyone can get behind. The cards' flavor text had a nice balance of humor and real-world commentary on the problems that giant corporations create. Can't wait for the release!"

"STRIKE! The Game of Worker Rebellion is fast-paced, it's tons of fun, and it raises awareness about the value of worker solidarity and collective action. What's not to love?"